From a Greenbush Area News

"Touching and chilling by turns, Phil's story, as narrated here, is a tribute to innate human dignity."
Publishers Weekly-May 1980

"Szydlowski's inspiration for Silent Song is her previous work with the real (New York State) Department of Mental Hygiene, as part of a team investigating mental institutions across the state." From an article appearing in the Times Union, Albany, NY November 13, 1980

"A rerelease of a book I read over ten years ago. This is a haunting story of a girl abused by her parents & the system for not being "normal" -- she's mute. The story follows her from a childhood most often spent tied to a tree like a dog, to her involuntary commitment in a state institution (circa 1950s?) that is abusive and degrading. Yet she survives with the help of herself and a few friends made along the way. Not an easy book to read but worth your time."
A customer review on Amazon.com. 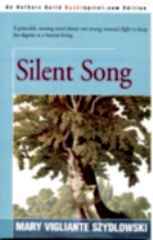 Reprinted in April 2000 as an Authors Guild Backinprint.com Edition

Her mother stood there motionless for several minutes, then suddenly, almost as if an invisible force was propelling her, she moved toward Philomena. When she came within a foot of her daughter, her eyes moved from Phil to the soft brown earth. Theresa's eyes began to tear, and she began rocking her body back and forth, the way one does when in great pain and thinks the motion will somehow help to stop the agony. She stopped staring at the ground and looked at Phil. Theresa tried to speak, but her sobbing prevented it. She looked once again at the ground, focusing on the word that was printed in the boldest letters: PHILOMENA. Theresa dropped to her knees and touched the letters, gently feeling the depressions they made in the cool soil. Phil could remember clearly how her mother raised her dirt-covered fingers to her lips, kissed them tenderly, and then moved the hand steadily downward till the fingers came once again to rest upon her name. Philomena watched as her mother's body shook, as her eyes darted again and again over the letters. She watched and heard the sobs, first barely audible, then louder and louder. . . . "Diu me perduna. God forgive me. What have I done? What have I done to my baby? God forgive me."