The new book cover for THE HAND OF MY ENEMY. Some of my books are hanging on the wall in the background. 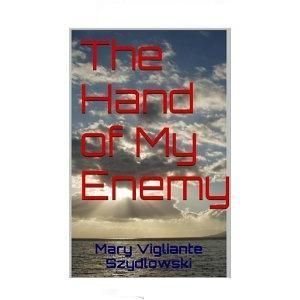 THE HAND OF MY ENEMY

In the deadly game of war, player nations must continually "up the ante" on their enemies. Sparing no expense to create an arsenal of ever more lethal, ever more destructive weaponry. But an escalating arms race can have unintended consequences. Cataclysmic, catastrophic consequences! Something goes terribly awry while testing a new type bomb. Its detonation unleashes an apocalypse, bringing a once mighty empire to its knees in ruin. Who will save the dying nation? Who will extend a helping hand? When friends and allies abandon them there is just one place to turn...the enemy