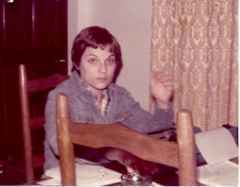 Sitting at the dining room table writing THE COLONY on my old Smith Corona portable typewriter.

"Vigliante creates a breathtaking sense of involvement." "The story is distressing and frighteningly realistic." part of the Janus Winter 1980 review of THE COLONY written by Diane Martin. 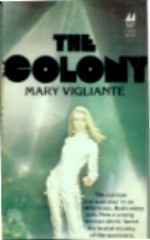 Published by Manor Books in 1979 under the pseudonym Mary Vigliante

Although this book is out of print. Used copies are still available at:

Hell awaited those who survived the nuclear war. Humanity had reverted to barbarism. All the evils of the old society had grown worse. Sunny had been captured by four men who informed her she was now their wife. When the survivors organized, the men far outnumbered the women. They created a society and a family structure that supported male dominance. By their decree women existed only to serve their husbands and male masters. Sunny resisted, but was beaten and forced to submit. When she could bear no more of their cruelty, she tried to run away. But they dragged her back. Then Sunny found a gun.

The Colony is the first of two novels about a post-holocaust world. The sequel, The Land, takes place approximately 300 years later. They were marketed by Manor Books as a series: Aftermath Book #1 The Colony and Aftermath Book #2 The Land.